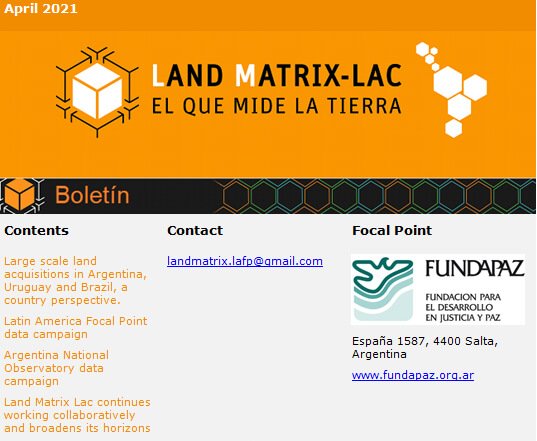 Country profiles for Argentina, Brazil and Uruguay in Spanish and English are available on the official Land Matrix website.

These «country profiles» present country-specific data on Lslas, including who the investors are, what the land will be used for, and what the potential benefits and impacts of such transactions are. By making this data freely accessible, Land Matrix contributes to the goal of improving public participation and information sharing, facilitating the continuous improvement of the land database.
.

The country profiles are available for download at the following link:
https://landmatrix.org/resources/?category=country-profile

The Latin America Focal Point launched its 2021 data campaign.
The data campaign focuses on two activities that were considered relevant to the region given the magnitude and speed of their expansion. These activities are wind farms in northern Brazil and Lithium exploitation in Argentina, Bolivia and Chile.
In many cases, «green agendas» are the main drivers of land appropriation linked to biodiversity conservation, biocarbon sequestration, ecosystem services, ecotourism or clean energy, as in this case. In many cases, local people are negatively affected by dispossession, displacement or enclosure, especially in areas previously used as commons.
As a result of the data campaign, these deals will be an input for aligned ongoing research.

The process of reviewing, updating and uploading deals from Argentina by the National Land Observatory (ONA) has begun.

For Latin America and the Caribbean, to date there are a total of 1060 deals uploaded with their minimum information requirements and under constant revision and/or updating (https://www.landmatrix-lac.org/casos/). The highest percentage of deals is represented by Argentina, Brazil and Peru.

We continue working together with the organizations of the “Gathering of Peasant and Indigenous Organizations of Northern Argentina” -ENCONA-, to give visibility to many deals of land grabbing throughout the north of the country that affect the land rights of rural families. In this sense, Land Matrix also collaborates in the dissemination of ENCONA’s public advocacy activities through social networks.

Within this framework of this collaboration, a dialogue has begun with peasant leaders, members of ENCONA, from the area known as Salado Norte (Santiago del Estero Province), for the production of a technical report analyzing the social and/or environmental effects of the Lslas in their territories. This document will be presented in the next dossier of the initiative for LAC. Likewise, the aim is to gather information for the uploading of deals into the database. These tasks are coordinated together with Fundapaz technicians who articulate and support actions in the territorial conflicts present in these organizations.

Land Matrix LAC has been working with MoPProFe for several years. The Provincial Movement of Small Producers of Santa Fe (Argentina) received the support of Land Matrix at a crucial moment when the expiration of a law was setting in motion a series of distressing land evictions of peasants and indigenous people in the Province of Santa Fe.

New Partner in Brazil: After several years of negotiating in different areas, we finally have a strategic partner in Brazil! This is a great joy for the whole Land Matrix LAC!. Although we have been working for several years to make the land situation in Brazil visible, without having an internal ally; now that we have closed an agreement with DATALUTA we are very hopeful that we will be able to carry out a greater task and of great impact in supporting access to land for peasants, indigenous people and afro-descendants.

DATALUTA is a network of researchers from various universities in Brazil who have created a database with a diversity of information related to the struggle for land. It is a great joy to be able to work together with them!

Renewal of agreements: All members of the Land Matrix in Latin America have renewed their agreements and above all their commitment to continue working together in the search and investigation of Lslas deals, and to contribute to political advocacy to mitigate land grabbing in the region. New agreements for another year of action; with OUOT in Honduras, Nitlapan in Nicaragua, Universidad Javeriana in Colombia, Sipae in Ecuador and Inenco in Argentina. In addition, we are in contact with all our friends in the Partners Network for new joint actions.

New horizons: In February 2021, the first articulation meeting was held between the Land Matrix-LAC Focal Point, the “Ethnic and Peasant Territories Observatory” of the Javeriana University and LM collaborator in Colombia, the “Collaborative Strategy in Colombia for the guarantee of land and territorial rights” -ENI/Colombia- and Senator Wilson Arias of the opposition party Democratic. The purpose of this meeting was to discuss common interests on the phenomenon of land grabbing and agribusiness in Colombia and the possibility of carrying out joint advocacy activities this year.

From the analysis of the evolution of mining concessions through the National Mining Cadaster between 2005 and 2019, it can be seen that there has been an increase in the surface area of mining blocks in the province of Esmeraldas. In 2005, the surface area of these blocks was 11,389.63 hectares, corresponding to 0.78% of Esmeraldas, while by 2019 it was 79,005.9 hectares, or 4.9% of the province. In particular, they are mainly located in the cantons of San Lorenzo, Eloy Alfaro and Quinindé. The blocks of more than 200 hectares that correspond to large scale land acquisitions are 40, covering 73,545.3 hectares.

Of the 40 mining blocks mentioned, 13 are registered while the rest are in the process of being granted. Of the registered blocks, 5 are registered in the Land Matrix global observatory, corresponding to the company Newcrestecuador S.A. and the company Valle Rico Resources VRR S.A. These blocks are in initial operation.

We call attention to the fact that in the cantons of San Lorenzo and Eloy Alfaro there has been a ruling of precautionary measures suspending all mining activity since 2011. Despite the ruling, mining activity persists in the cantons, causing environmental and social impacts that affect the Afro-Ecuadorian, Awá, Chachis and Épera communities. For more details, we invite you to read the technical report «Large scale mining land acquisitions in the province of Esmeraldas, Ecuador, 2000-2020» by Marcela Alvarado, Pablo Minda and Paola Maldonado.

Evolution of mining concessions in the province of Esmeraldas (2005-2019)

On April 2021, Griselda Salas Barboza, a member of INENCO, began her postdoctoral fellowship at CONICET with the work plan entitled: Access to common goods and water governance in the Chaco region of Salta. The main objective of the proposal is to analyses the existing conflicts between different actors in relation to access to certain common goods (land and water) in the context of the occurrence of Lslas, and to determine the forms of access, appropriation and use of the water resource in order to describe and understand water governance in the region.

In a generalized way, the advance over new territories implies control over land and also over the rest of the resources associated with it. In this sense, Lslas can be linked to a social process of transformation of the commons into financial capital through «accumulation by dispossession». This transformation implies changes in the distribution of opportunities to access, use and control natural resources associated with land (water, forest, pasture, biomass, among others). Particularly critical in arid or semi-arid areas is access to water, and many Lslas may be motivated by the desire to acquire freshwater resources. Indeed, the availability of water resources conditions land productivity, and therefore makes up a strong driver of land investments globally. The appropriation of a region’s water resources (surface and groundwater) implemented through Lslas essentially makes up a process of «water grabbing», including both rainwater and irrigation water.

Particularly in the Chaco region of Salta, Lslas make up a mechanism of water appropriation that is not explicitly manifested through the plundering of the resource, but is revealed when analysing the water requirements of the agricultural model and the water that remains hidden behind the export of products (virtual water flows). The control exercised over water resources influences management and governance processes at local and regional level. If this aspect is not taken into account in public policies, it could lead to situations that threaten the «water justice» of the region. In this sense, it is relevant to deepen the knowledge related to access, appropriation and use of water resources in the TWGs in order to detect situations of socio-environmental injustice and contribute to more sustainable decision-making in relation to water governance.

Contribute to the database on land transactions!

This is an invitation to organizations working on land issues, academic institutions, researchers, grassroots organizations, government offices, and committed individuals, who are interested in sharing any kind of information on large land acquisitions in Latin America.

If you want to contribute with this initiative, you can file a report on a large-scale land acquisition by filling in a form available here.

Documents and reports produced by the Latin America Focal Point, including an update of large-scale land acquisitions in the region, available here. 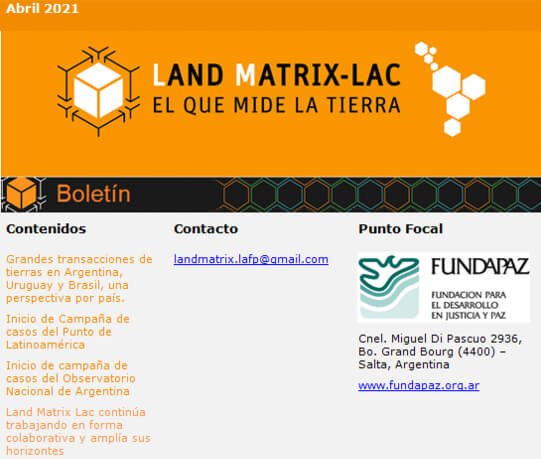 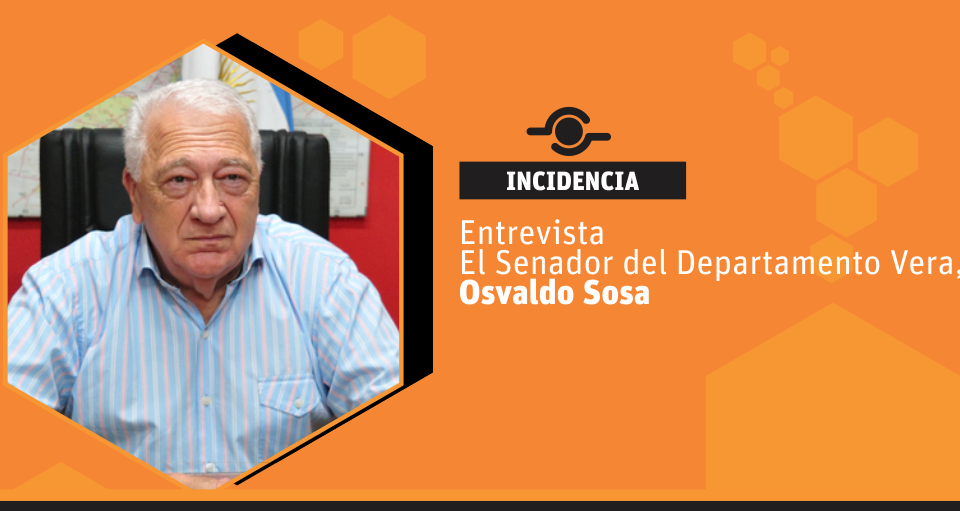 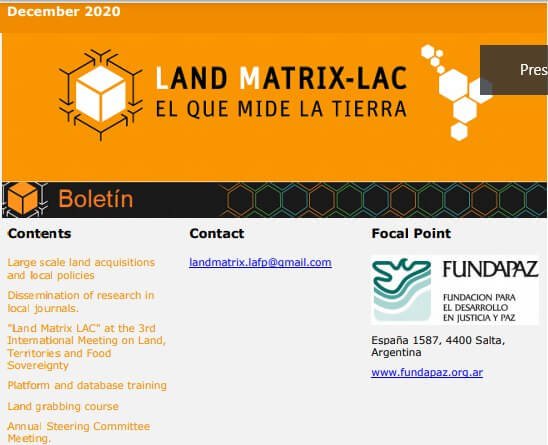